Took my time getting started and probably left Portland around 10am. Dez lent me some audio books (Thanks Dez) and I leisurely drove to Seattle arriving at about 3pm. Had the top down most of the way, but had to put it up about an hour outside of Seattle because I was starting to get sunburned. Its 90 degrees in Seattle today! 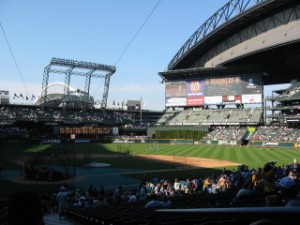 Caught a shuttle from the hotel to the ballpark and arrived about 5:30 pm. Took a tour of the park and then got close to home to watch batting practice. Look who’s standing behind home plate shooting the breeze. It’s Lou Pinella and Tony LaRussa. 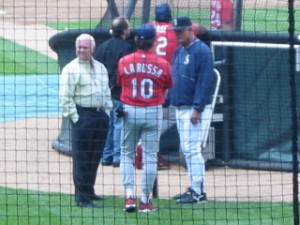 Two great managers and players from when I was a kid. I especially remember Pinella from the World Series between the Yankees and the Dodgers. He was a good hitter. Unfortunately.

Next, I sample the local cuisine of Ivars fish and chips. Not much drama in this game. The M’s took an early lead over the Cardinals with a 3 run homer early in the game. Eventually the score ended 5-0 Mariners. One of the Mariner’s players is the fan favorite Ichiro Suzuki. He’s exciting to watch because you know he can make something happen.

Now the trip gets a little more interesting. Its time for the PCH leg of the trip. I have no idea what I’ll find or how long it’ll take.