In the morning, Ron and Roe took me out to breakfast in downtown LA at a cozy little old restaurant surrounded by skyscrapers. It was good standard fare. After we got back I packed up and headed south to San Diego.

About halfway between LA and San Diego is a town called Mission Viejo. I had lived there for 10 years before I moved to Utah. My plan was to stop there and revisit my childhood. I did exit off the freeway, but I couldn’t find anything and I didn’t really have the time. The Padres game started at 2pm. So I got back on the freeway. I would come back to Mission Viejo later.

I arrived at the ballpark at about 1:30 pm. Qualcomm Park is a pretty generic park and doesn’t really have any charm at all. Not much variety in food either. The Padres were playing the Mariners. They had followed me to San Diego! 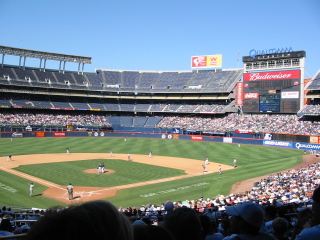 Again the home team took an early lead and the Mariners could never quite catch them. In the last inning the Padres brought in their star relief pitcher. It reminded me of a scene out of the movie, Major League. As the pitcher walked out to the mound a rock song was playing and the scoreboard was announcing it was “Trever Time”. When there was two strikes everybody in the stands would standup and cheer for a strikeout. They weren’t disappointed. He ended up striking out the side to end the game. 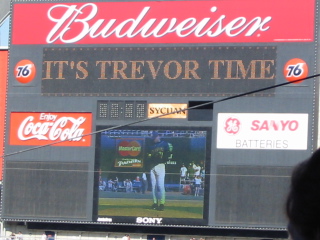 My friend from tennis, Art, has a place in San Diego, more specifically on the island of Coranado. He always goes there for the summer. We had talked before I left on my trip and the plan was for me to give him a call. So I gave him a call and he told me where to meet them. I was to meet him in a park in Coranado where Art and his family were awaiting a community concert. I went to the park and sat with Art and his family enjoying the concert. Art and I also talked about tennis. Art’s son, Arthur, earlier that day, had won his first tennis tournament. Arthur is a rising freshman high school tennis player.

After the concert we went to Little Italy in San Diego and had dinner. Art didn’t have any room at his place for me to stay, but Art offered to let me spend the night on his boat, which was anchored right outside his house. I agreed and off we went.