In the last post, I talked about various architectures used as alternatives to MVC, in a attempt to solve MVCs problems, such as Massive View Controller.

In this post, I would like to introduce you to another architecture, which seems to me to be the best starting point for your app’s architecture: the Clean Architecture.

I think I first ran into the Clean Architecture in one of Uncle Bob’s presentations on YouTube. At first, I kind of wrote it off as a typical Java over-engineered design pattern. It wasn’t until earlier this year, probably years later after my initial discovery, that I ran into it again. I was looking for a better app architecture after an experience working for a large company with a large iOS team (with about 11 developers) and all the issues they had getting the app to work and test it. I kind of became obsessed with figuring out how to make an app easier to test. I searched the internet for app architectures and studied them. It took me awhile to get my head around the Clean Architecture, but once I did, I decided it would be my starting point for an app architecture.

Uncle Bob also has a blog post on the Clean Architecture.

The roots of the Clean Architecture go back to the 1993, when the book Object-Oriented Software Engineering: An Use-Case Driven Approach by Ivar Jacobson was published. In it, Mr. Jacobson proposed a design approach where the use case was the central concept an application design was built around. A use case is very similar to what we now call a user story. It’s basically a function the user can do with the app, such as create a new user in a payroll app, for example.

According to Uncle Bob, the industry was just starting to learn that this was a good way to design applications, when in the mid to late 90s, the web arrived and threw everything into disarray. We had to figure out how to write web applications and we stopped thinking about how we did it for desktop applications.

Eventually we started thinking about architecture again, and MVC was adapted to web applications. That is probably how most developers were introduced to MVC. Maybe more recently when they started doing iOS and mobile development. Uncle Bob says MVC is not a architecture, but a design pattern. Originally, it was designed to control one single thing on the screen like a button. Every button, text field, etc., would have its own controller, view, and model. It was then adopted as an application architecture and this is the cause of its problems.

Because of these problems, everybody is thinking about architecture again and we’re seeing an explosion of app architectures. People are looking for solutions to their problems such as testing and writing code that is easy to maintain.

The Clean Architecture is very similar to these other architectures that you may have heard of:

I like to think about the Clean Architecture as a way of creating an engine for your application, much like you would create a game engine. You have some code tucked away in some libraries that is independent of the platform it will run on, or its environment. That’s really what it’s about.

Here’s a diagram of the Clean Architecture:

The engine, or core of your app, are the 3 circles (yellow, red, and green) in the middle. They contain the entities, use cases, interactors, and other objects of your engine. They know nothing of UIKit, Core Data, Realm, HTTP, the web, or any other delivery mechanism, as Uncle Bob calls them.

The outer blue circle contain the external things your app needs to talk to, such as a delivery mechanism (i.e. the UI, UIKit, A web browser, etc). It also contains other things that your app needs to talk to to relate to the outside world, such as databases, networks, or even a sensor somewhere. Examples would be Core Data, a REST API, or a bluetooth sensor. These are not part of your engine or app core, and your app core will not know anything about them. It will know about some protocols it can use to talk to them.

The Clean Architecture has the following components: 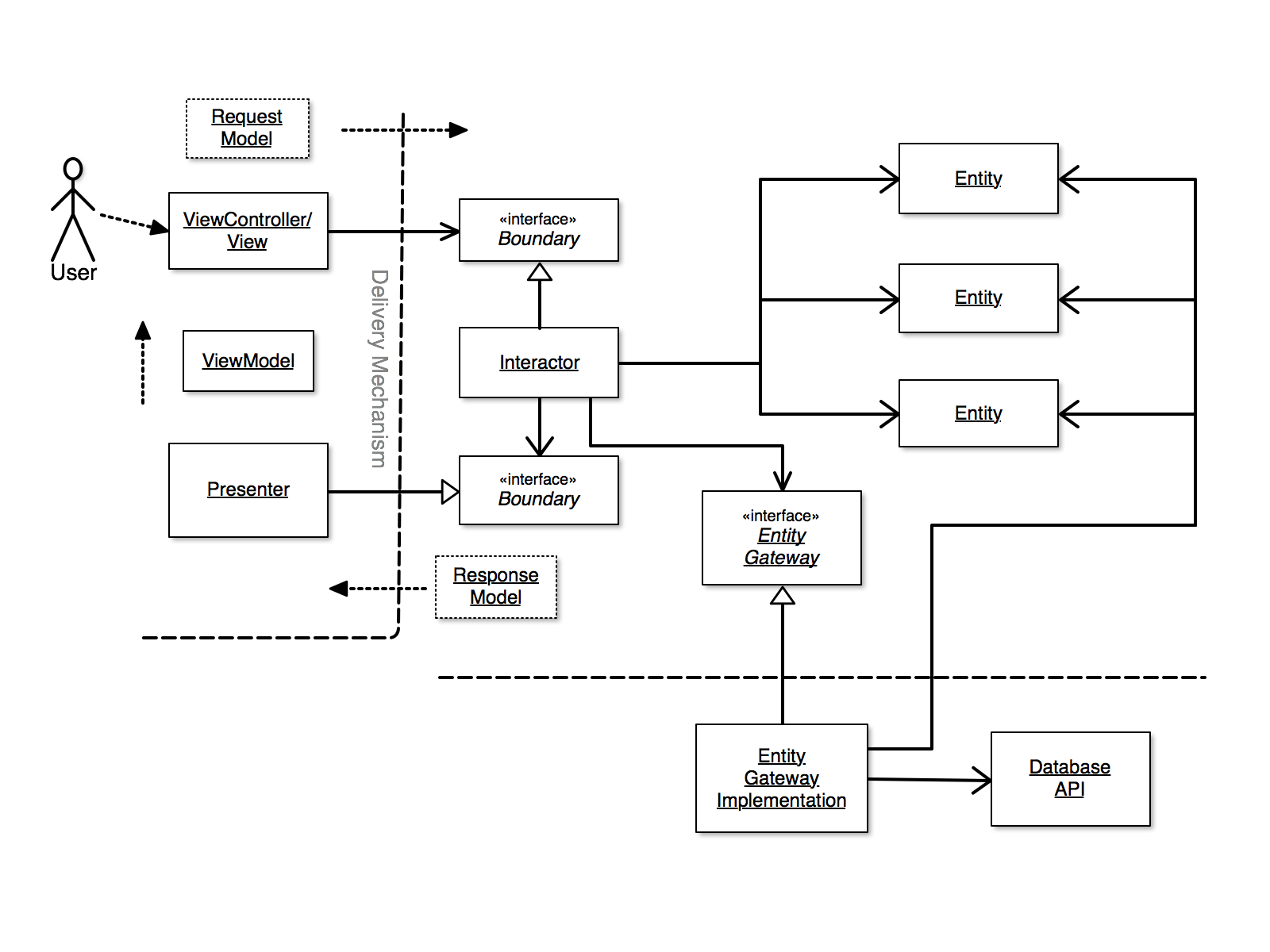 Let’s say we have a create user use case. Here’s how everything works:

One of the benefits and main goals of the Clean Architecture is testability. Uncle Bob advocates doing Test-Driven Development (TDD), saying that writing tests after the fact are a waste of time. The tests guide your design. If the tests are hard to write then something might be wrong with your design. The tests let your refactor very quickly and tell you when you are done.

The Clean Architecture makes things easy to test with its use of boundaries. Anywhere there is a boundary (or protocol), you can substitute another object that implements the protocol. Your delivery mechanism can just be your tests. Your Entity Gateway Implementation can just return some stubbed data. This makes it very easy to test things in isolation by replacing all of an object’s dependencies with stubs or mocks. This also makes the tests very fast.

The views are really dumb and don’t really need to be tested. You can write some tests just to make sure that they call the right boundaries methods when they should. You just replace your interactor with a spy that records when a method gets called. Your tests just verify the methods are called.

Uncle Bob says you don’t need to test the views or UI. I would tend to agree with him, but I’m not sure you can completely get away with that with management. It’s easy enough to add the tests I described above. I would leave testing of the rest of the UI to the acceptance tests. Remember, you want your unit tests to run very fast. You will be using them constantly. UI testing (by that I mean user-based end-to-end black box tests) will always be be slow.

J.B. Rainsberger is a consultant that helps companies solve their architectural and testing issues. I highly recommend his blog. In a presentation called “Integrated Tests are Scam”, he talks about how it is impossible to write integrated tests that cover everything. Your tests just get slower and slower as your app grows. There are just too many code paths. All you really need to test is the boundaries. Hence the need for a good architecture like the Clean Architecture.

Have your developers write unit tests for everything (maybe even a little view testing with everything else stubbed out). They can even write some unit tests that test the integration between the different layers (i.e. test the boundaries). Leave the end-to-end testing, or acceptance tests to your QA engineers. Their job is to determine if the software is acceptable by the customer. They just need to write acceptance tests that test each use case from a user’s viewpoint. Uncle Bob was involved in the creating of an acceptance test framework called Fitnesse.

Uncle Bob says a good architecture maximizes the number of decisions not made. The Clean Architecture does that by providing clear boundaries between different parts of your app in such a way that your app doesn’t care how things behind the boundaries are implemented. This gives you tremendous flexibility and independence. You can plugin different drivers of your app (i.e. UIs or tests) whenever you want. Same thing with the other external dependencies of your app (i.e. database, network, etc.)

This article presented a lot of information, and it will probably talk multiple readings and studying of the articles and videos I linked to to fully wrap your head around it. I believe you will find it worthwhile.

Next time, we’ll get practical. I plan to take a classic or common Cocoa example that uses MVC and convert that to the Clean Architecture.