Today was my first full day in Austin. I decided to take a drive down to San Antonio, which was just about an hour and half south. I wanted to see the Alamo, and my friend Laury had told me about the cool river walk there. So off I went.

For those of you who are not familiar with the Alamo (miss a little school, did we?), here’s the deal. The Alamo was a fort in Texas when Texas declared their independence from Mexico. Santa Ana brought his troops into Texas and the Alamo was the first line of defense for Texas. Texas was not ready to fight Santa Ana yet and the Alamo had to slow down Santa Ana enough so Texas could get ready. Some legendary figures were at the Alamo, including my boyhood favorite, Davy Crockett. Every last man who fought at the Alamo died there, but they slowed Santa Ana down enough and they inspired the rest of Texas, who cried “Remember the Alamo”! Eventually Texas won her independence from Mexico and became an independent nation and of course joined the United States not long after. Some say Texas never officially joined the U.S. and is still an independent nation, but it is not recognized as such.

Alright, enough history. The Alamo was interesting enough and certainly inspiring, but not quite what I pictured. Very little is left of the original place and much of it is now a museum and a place for tourists to visit. The statues are cool, the grounds are nice, and the story itself is enough to inspire you. 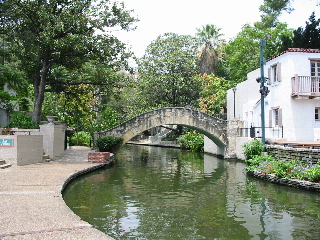 After that I went to the river walk and probably walked about five miles. It is a pretty cool thing and is pretty unique in all the cities I have ever visited.