Sunday morning, I decided to go downtown and check out the JFK museum. John F. Kennedy was assasinated in Dallas on November 3rd, 1963. I wasn’t alive then, but I can imagine and I believe that it was a day that affected America even more than September 11th. Here was a president that many people admired and looked up to. Shortly after he was assasinated the decade of the 60’s went into full swing and changed America forever. Vietnam, the assasination of Robert Kennedy and Martin Luther King, race riots, the drug culture. All these things occurred and much more. America was never the same.

I parked downtown and one of the first things I came across was the JFK Memorial. You wouldn’t know it if it didn’t say John F. Kennedy on it. A rather bland and strange memorial for such a popular figure and major event in American history. 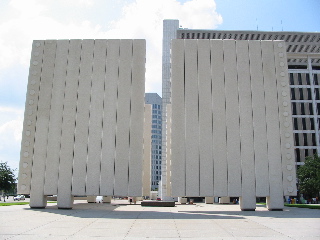 Next was Dealy Plaza, the place of the actual event. I walked the Grassy Knoll and the area behind the fence, where rumors persist there was another shooter. On the road where the fatal shot occurred is an X to mark the spot. There is also a round plague next to the sidewalk, across the street from the spot that marks it as an American historical spot. However, it says nothing about the historical event it marks. Very strange. Crowds gather around speakers still arguing and selling books that say there was a conspiracy. The whole area has a little ominous feeling that something is not quite right. 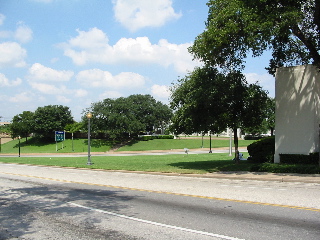 Next, was the JFK museum, which is in the old Texas book repository where Oswald supposedly fired the shots. It tells the history of the president, of his administration, of the fateful day, and of the world’s reaction after the event. For not being alive at the time, it still had an emotional effect on me. Personally, I believe JFK was assasinated to stop him from doing something that the establishment didn’t want him to do. I feel that when he was killed America suffered a near fatal blow to her founding ideals. It was the beginning of where we are now.

There was also a section that showed Pulitzer Prize winning photographs of important events around the world including September 11th. Also very emotional. It brings home the point of how fortunate we are here in America. In a lot of places around the world, life is a lot more difficult.

Even though it did affect me emotionally, it was also a little disgusting in a way. Here was a little industry set up around the death of a man. It seems like we should just move on and stop dwelling on an event that happened over 40 years ago.