This week I went up to Montana with my parents. Today, my mom and I decided to take a raft trip down the river that flows through Gardiner and down Yankee Jim Canyon. We’ve been on rafting trips before. Nothing tricky, just nice gentle trips with a few small rapids. We asked around and were pointed towards an outfit about a mile down the road. A place called Big Sky Whitewater.

We pulled up and there was another mother and her son, about 14 years old. We were just in time because they wanted a trip and needed some more people. We were set to leave in 15 minutes with two guides, making a total of 6 people. We asked about the trip and made sure we were getting in anything over are heads and we were satisfied.

We put on our lifejackets and started out and had about a mile to go before the first rapids. The guide talked about safety measures and how to paddle the boat, what commands he would use, etc. All the time he would say he has never flipped a boat and never had a customer fall out of the boat. He said it two or three times. I don’t know about you, but I’m always a little leary when someone starts a sentence with “I never…". Quite often the thing they say never happens, happens. Usually soon after.

We talked about the rapids coming up and various things that had been happening around town. Like a bad accident on the road with a motor home, and a accident with the boat that preceeded us. It had flipped. It didn’t quite register with me that that was the boat that had directly left before us. Later I would realize it was so.

All this talk was making me a little nervous. I could see my mom was feeling the same. As we leisurely floated down the river the guides and the 14 year old took turns jumping in the river to get used to the wet. I remember thinking maybe I should do the same so I wouldn’t be shocked if I fell in. I dismissed the thought as one usually does.

Our first rapid was called Yankee Jim’s Revenge. Unbeknowst to us, this particular rapid was swelling today. It was the spot that had flipped the previous boat. As we were going into the rapid, we were paddling according to our guides commands and we were heading right for this swell. As we got there our boat went down into the hole created by the swell and just as the water was coming back up our boat popped up and took the full impact of the swell. 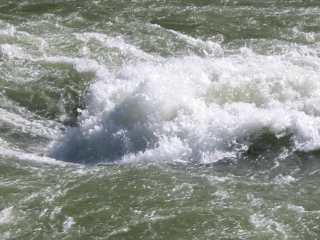 Before anyone knew what was happening we were all in the water with the boat flipped over. All I remember is seeing one of the guides out of the corner of my eye losing his balance and then I was under the water, seeing nothing but whitewash swirling around my face. I came up and tried to get my bearings and catch my breath, having swallowed some water. I saw the boat and everybody else floating off to the right shore, while I was heading towards the opposite shore. As I struggled to relax, I yelled out so the others would see me, but they were too busy with their own struggles. I could only see the guide on top of the boat trying to get a hold of it and a bunch of people running on the road above the river. I remember thinking that this could be it. I could end up going down the river by myself, trying not to drown. Another rapid took me and I went under again. Again, I came up trying to catch my breath. Fortunately, I was now out of the rapid, though the current was still strong. I was on my back and back paddled about twenty yards to the shore. I climbed up on the rocks and muttered a prayer that everyone would be ok. I looked across the shore and couldn’t quite tell if everyone was there. Eventually, I could, and I saw my mom and everybody else resting on the shore and getting their nerves back.

As we discussed everything later, a few more facts emerged. My mom and been trapped under the boat and had to hold her breath for awhile until one of the guides was able to lift the boat. The other mother later admitted to my mom that she had cramped and couldn’t move her lower body. Her son had pushed her and a bystander on the shore and lifted her out of the water.

I had to hike down the shore so the boat could cross the river to pick me up. When they were all calm they did so. We were all a little frazzled and jumpy. We continued the trip, avoiding any nasty rapids. We were all soaking wet and glad we had escaped with nothing but frazzled nerves. Later we found out about the boat that had preceeded us. It turned out that it was a private boat (i.e. no guides) composed of a family of about 6 people with two little girls (around 6 years old) and grandfather. The grandfather had suffered a heart attack and died. That increased our feeling that we had been lucky to get away unscathed.

That week a lot of strange things had been happening in the small town of Gardiner. Along with the boat accidents and the motor home accident (with more deaths), there was a bar room brawl and a motorcycle crash that had also claimed lives. All in the same week!

All I can say now is you have to LIVE life. Things can change in an instant and it can be all over. It’s usually when you least expect it. And always be extra cautious when someone starts a sentence with “I never…”