In the last post, I talked about MVC, its problems, and how it could be done right. Various architectures have emerged to try to address the deficiencies of MVC. Before I talk about the Clean architecture, I’d like to talk about some of them.

Up front, I don’t have a lot of experience with these, but I have studied them and I believe they are a step in the right direction. They all introduce another object to take over some of the responsibilities from the controller, but I don’t think they go far enough because the new object typically has too many responsibilities as well and tends to grow just as the controller in MVC does. They do spread the load though, reducing the issues with MVC and increasing testability.

MVP treats UIViewController as part of the view (as it should), and introduces a new object, called the Presenter. 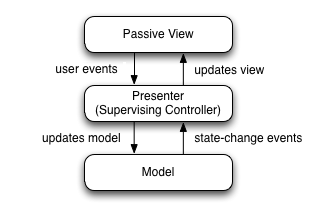 I think MVP was popular in the Microsoft world and their tools supported it. I’m not sure that is still the case. I think it has been supplanted by MVVM.

MVVM treats the view controller as part of the view as well, and introduces a new object, called the ViewModel.

MVVM is becoming quite popular in the iOS world and is closely linked to Reactive programming. It is also sometimes called “Massive View Model” because it can suffer from the same problem as MVC.

Developers are coming up with alternatives to MVC all the time. Two mentioned by some prominent people are MVC-N and MVC-S.

MVC-S, or Model View Controller Store, was put forth in iOS Programming: The Big Nerd Ranch Guide. It basically adds a Store object into the mix that handles storing and fetching data either from a database and/or the network. All you’re doing here is moving that logic from the controller or model into another object. Again, its a step in the right direction, but not enough.

Marcus Zarra, of Core Data fame, made a presentation called MVC-N: Isolating networks calls from View Controllers, which also moves network calls out of the controller or model into a separate object called the Network Controller.

VIPER is not like the other MVC based architectures, because it actually has a cool name ;). Actually, it’s because it is an implementation of the Clean Architecture that I will be delving into. VIPER stands for View-Interactor-Presenter-Entities-Router. The router is also known as the Wireframe. It was introduced in an article in objc.io called Architecting iOS Apps with VIPER.

VIPER treats the view controller as part of the view, but instead of introducing just one new object, it introduces 5: The Interactor, Presenter, Entities, a Router, and a Data Store. As a result there is a much better separation of concerns.

I’m not going to say much more about VIPER since I will be delving into greater detail into another implementation of the Clean architecture in another post. The implementation I will talk about is Clean Swift. I like it better because it has a unidirectional data flow, whereas VIPER has bidirectional data flow between the view and the presenter. It just made more sense to me and seemed more faithful to the goals and purpose behind Uncle Bob’s Clean Architecture.

Let me conclude by saying that no architecture is a silver bullet. The architecture that work best for you depends on the app and the situation it’s being developed in. If it’s just you writing an app you might consider some of these to be overkill, especially VIPER. If you are in a team environment, building a large app, it just might be the thing you need to bring order to the chaos.

Thanks for reading and stay tuned for the next article where I will start delving into the Clean Architecture. Also, please sign up for newsletter below if you’d like to receive new articles right to your inbox as well as other useful things in the future. I will not spam you.